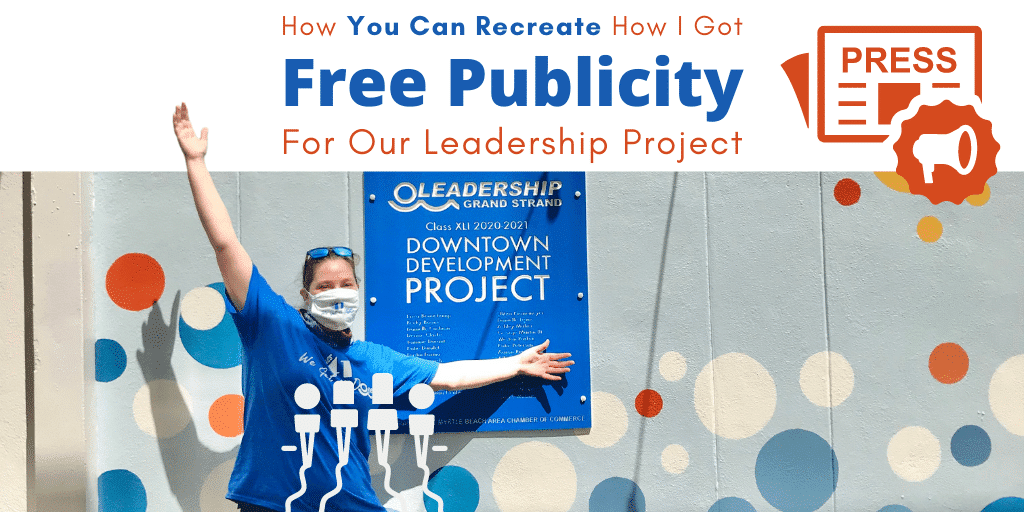 How I Got Free Publicity for My Leadership Class Project

Last year I was accepted into Leadership Grand Strand. To graduate from the program their are a few requirements – like 75 hours of community service, which includes a class project. We are proud & relieved to have recently completed our project, which was a mural located in the downtown area. Afterwards I was surprised to receive so many congratulations/thanks afterwards about the amount of press recieved.

To me it was just normal stuff I was doing, but if finally occurred to me not everybody sees community projects as a marketing opportunity like I do, and you might like me to share how I did it.

Like, duh! This is literally the reason I started in this blog in the first place… 😅

On this page I’m going to walk you through the exact things I did, but the biggest thing you can do is to make it as easy as possible for the press (or others) to share. All of the tasks I did were made to support that point.

Wrote a Dummy-Proof Press Release With Lots of Content

Here’s an outline of what my press release included:

So this format provided a ton of information that the media could pick & choose from, but having short bullet points at the top really helps them to decide if it’s worth reading. That sounds bad, but again this is about making it easy for them. They get so many emails they’re not likely to read it all the way through, so this allows them to read & know at least something about what you’re doing as opposed to nothing. It might also help them in forwarding it on to a more appropriate person instead of just deleting it.

For the project quotes, I reached out to a few people via email. I made sure to get one of a participant that was very involved in the project, the person over the Leadership Program, and someone from the city (or other important partner). Be sure to include their relevance or role.

At the end I provided a link to a dropbox folder I was maintaining. I added pictures & media to the folder through out the duration of the project. By providing the link up front instead of just an email attachment, the folder would be up to date no matter when they decided to check it. I also provided the link to other participants & partners.

By the time I was finished, the folder contained:

While I did publish the press release on the chamber website, it wasn’t the only thing I did with it. Hopefully you’ve already started to build an email list of press contacts, but if not this is a great task for an intern or volunteer – they would just Google local newspapers, radio stations, etc. and find or ask for a public email address to send press releases to. Do not add every staff member you can find to this list! That’s a great way to get ignored or blocked real quick.

I also sent it to my fellow participants and sponsors/partners.

Recommended: How to Get Free Publicity: PR Tips for Chambers of Commerce

Since I had regular access to new photos and the program Facebook page, I made regular Facebook posts with updates on the project. These weren’t fancy – usually just a collage I made in Canva, but they got a lot of likes.

Thank you volunteers for your hard work today! #LGSClass41 #myrtlebeachmoments

“And then there was light” -Horry Telephone Cooperative, Inc., probably (Lighting went up today above the mural) #LGSClass41

This had the added affect of increasing the Page’s Reach & Followers – which means when they posted about applications or sponsors later, more people were seeing those next posts.

In true chamber fashion, I also scheduled a ribbon cutting to celebrate the completion of the project. I scheduled a Facebook Event to help promote it & invited “Participants, alumni, sponsors, and other supports are all welcome to join us for a brief photo opp.”

And wow, did they come out to support.

FAQ: I used Switcher Studio to have the logo on the video as I was Live on Facebook from my phone.

So to recap, I think the biggest thing you can do to get free press is to make it as easy as possible for them. I created a really good press release that gave them a lot to work with, constantly took new photos, and had some amazing teammates that were open to doing interviews. 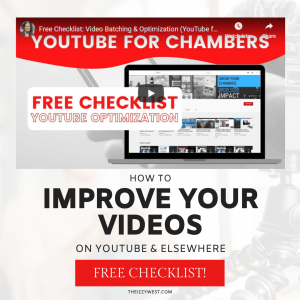